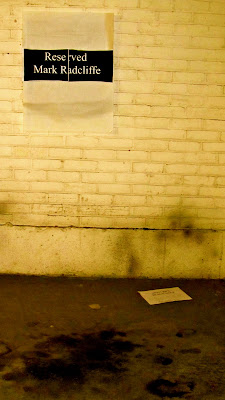 I was going to post a pic of Mr Maconie too with his arm around me laughing while my friend took the shot, but I can't. I have to admit to losing the shot, along with film of that night's event,run by

from a packed backroom at The Castle Hotel, a place where flat caps and crusted eyeliner vie for primacy in the indie individuality stakes, only to be overdone by the occasional Julian Cope looking bloke or the almost there Juke Box.
Instead, you will have to make do with this solitary image taken when i attended the BBC buildings in Manchester for a book review slot on the Indus Radio Show. The novel, and the author of the novel, Daisy Hasan was in attendance. I have to say that the experience was a bit nervy, having never read a book with a view to expressing a view of the theme and stylistic content, though I found that it was a rewarding evening, and one which proposed the potential for a written interview with the author for publication in India...watch this space.

I did however, make a little imovie film of the event, so if you ever have a coffee moment to spare, then I would much appreciate it.

So what else...I have been doing some new art - and have updated my website...ting 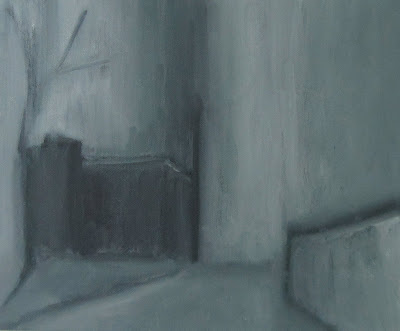 and now i have nothing more to say other than, than.
Posted by garside at 08:38 No comments: 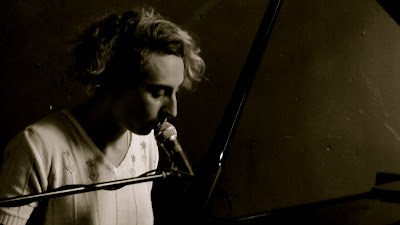 Najia Bagi
(Najia, from Arabic, free,escaped)
In the 1993 film Shadowlands, Sir Anthony Hopkins delivers to the attentive hushed in some echoey hall, a speech which never ceases to pause my breath - 'we are like blocks of stone out of which the sculptor carves' he claims, slow shifting his audience to a close within the moment, within the scene, within the film.
Now it doesn't matter if you have seen the film (though you should), or skriked like a baby as I did when i first saw this, or for that matter if you care at all, as the point is stand alone true like a knife in your sock drawer - life carves...
i could i suspect, bang on about how psychology, the infant of ologies, could provide pigeon seed along the path, or perhaps stray down the forked tongue of nature vs nurture, but i won't. Instead, I want to introduce some music.
It was last December when I first heard Najia perform with Paul Balcombe. Together they are, The Ground. Of these songs; this music - I feel a sense of malevolent disquieted yearning, within which the DNA of melody of pain lingers long after the last resonant guitar string tolls into the ether.

Dig further back and The Ground are framed as two members of To Sophia, a boxed, contained sound within which the seems no room for escape into any creative mistake...

So, it goes without saying then that I was well chuffed at the opportunity to hear Najia again at Matt and Phreds.

There's a scene in the film Leon, where the main fella is explaining to his unlikely apprentice that the closer the proximity to the proposed victim, the more professional the killer. I suspect in artistic performance land, that solo performance is of a similar ilk - stripped bare of band members, with your words and an instrument is perhaps the most skilled, yet exposed method to deliver the audience killer blow.

I was however on this occasion, somewhat disappointed. In Najia is an artist who possesses the vocal range most choristers would bid their frock for and voice which has so much capacity for projecting the landscape of emotional turmoil. I could of course use this juncture to polish my nails with a list of musical influences I feel in Najia's work, but I won't - anyone who quotes Led Zeppelin alongside Billie Holiday as well as a propensity to gravitate toward Neo-Gothic literature and Anthony and the Johnsons, needs no assistance in the influence dept.

Oh yes, sorry - i was saying that I was disappointed. Well, I was - i wanted to really hear -

ascend to the ceiling and fuel the atmosphere. Not on this occasion though - as the support act, there is always the opportunity to get a little burned on the mic. Though i didn't think this so much the case in point - the reality being that alcohol induced chatter and plates of garlic bread had made their bristling camp, and thus the only success perhaps for Najia was the completion of her solo set without too much artistic scrutiny; thus giving her nervous system a bye to the next round -

my only hope is that on that occasion, Najia is given the keys to the venue so she can rip the roof off it... 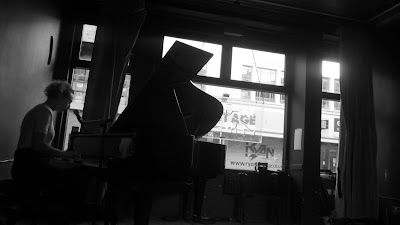