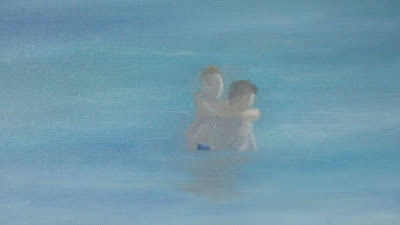 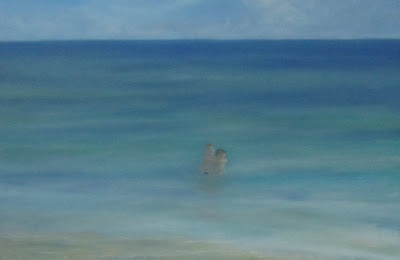 Outside, cold curls around concrete; frosting barbed wire to swirls of halo-like-ice-cuts set above the brick walls of Manchester, framing the night.

But I am inside - snow sliding off my damp boots; tucked under an oak church pew; glass of frothy beer settling dark in my hand while the event microphone is one-two'd under dimmed light.

The Event is 'Beatification', organised by the widely published socialist poet, and Mancunian a·fi·ci·o·na·do, John. G. Hall, who incidentally, has just published the first edition of, 'The Spleen', a poetic response to the current UK political landscape... 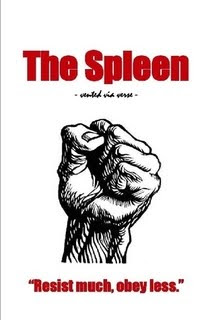 
Beatification this evening = Beat Poetry Film, topical rhythmics from Manchester based poets and an excellent swell of acoustic harmonics from the band, 'The Ground'. 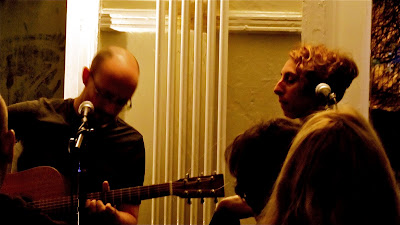 I confess to knowing very little about 'Beat Poetry' or the movement which twitched and surged through all US circuits before I was born. My ignorance is wholly down to being a peripheral fixate on all things Manchester throughout my teens, and thus somewhat provincial and introspective.

Beatification therefore, has snugged into my Monday evening as an apt opportunity to learn.

Watching the grainy film in a room for fifty or so when filled, I find myself smiling at the sheer freefall feel of Ginsberg's poetry, as the warmth creeps back into my toes and I fumble for a pen to record some thoughts. This is fast becoming learned behaviour, as the beat poetry films energise and encourage the merest creative act to the centre of experience.

Following the film, the poets line up to deliver their visions - Gerry Potter, Michael Wilson, John G Hall et al, do so with balanced verve for the brave souls scooting in from the cold of Christmas to listen - and forget for a few beautiful moments, the existence of cuts, the floods, the fist sized royal wedding and the VAT beanstalk stealth-twisting pantomine well beyond the season's year end...
Posted by garside at 03:35 No comments:

Epicurus plots a course for The Craven. 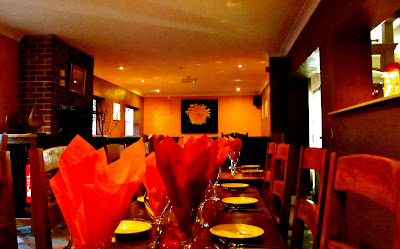 Over the Summer months, I read a book. The book was about philosophy. More specifically, the consolations which can be drawn from the philosophical teachings of great minds, now found bound on coffee shop shelves and echoed in bus stop conversations.

One of the thinkers noted in the book was a guy called Epicurus. For this greek bloke, living a fulfilled and contented life need only the presence of good food, good friends an other such related aspects of goodery.

Having been a pupil of the school of window gazing as a child, I was simply not interested in the lofty ideals of bearded heads. However, I have since had chance to grow my own beard(s), and so I realise that such learnings from antiquity have a very sheer relevance today. 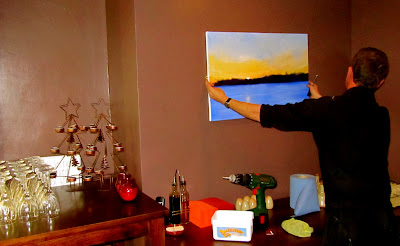 Good food and congruent company is a full-stop must, if venturing out beyond the squabble of cheap booze shops, crowned with Orwellian cameras, is to be considered a worthy cause.

If Epicurus was alive today, I have no doubt that he would indeed plot course for 'The Craven', where he would find generous portions of Spanish and English dishes, friendly service, and also discover an elegant and contemporary interior - a further non-negotiable experiential when dining out with friends, lovers, family or colleagues. 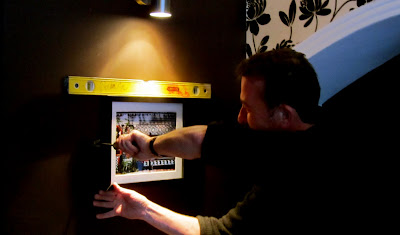 It goes without saying then, that I am exceptionally pleased that the owner, Mrs Catherine Walsh, gifted me the opportunity to hang my artwork on the walls of her excellent tapas restaurant. 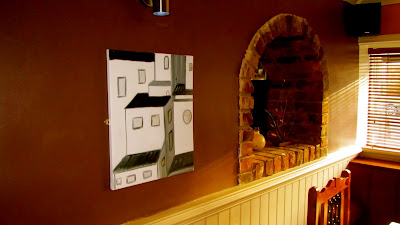 Yesterday, with my good friend Mr Rush, we placed and wall mounted the paintings and photographs - the finishing touches on what has indeed been an interesting year. For me, it is a year which has in some ways crowned the effort and learning I have invested in painting and other artistic mediums to date. Knowing now that my artwork furnishes a space where great food, great service and welcome company can be found, finds me very content in this moment.

So - if you want to escape the couch of mediocrity this Christmas, then... 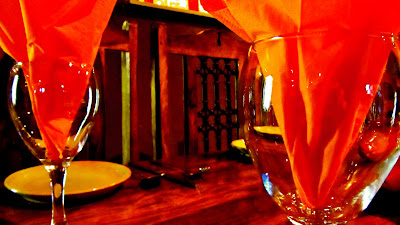 It's cold and dark. The reclaimed structure amber illuminated in front of me is the British Muslim Heritage Centre. Later I would discover the facts, figures and future plan for this magnificent building, but, for a moment, I just want to marvel in the majesty and authority of this building, before scratching underfoot, the grit on the stone steps, and enter to receive the welcome warmth from the massive hot air blowers placed like sentinels at the apex of the inner stairwell.

At night, this neo-gothic structure presents as imposing within the surrounding grounds; walled in within Whalley Range, an area of Manchester I learned of while sitting in my barrack room with my suitcase sized Walkman, listening to Morrissey and the Smiths,

What do we get for our trouble and pain? Just a rented room in Whalley Range...

True, these rooms have been the temporary home for those of Faith and Trade, and now, the former Lancashire Independent College is in the midst of a multi-million pound renovation project, and as such is a major foundation stone for British Muslim Heritage.

The evening is underway - the large white vaulted hall, fills to a seated brim with those gathered to listen. For this evening is dedicated to literature, discussion and reflection. Professor Tariq Ramadan is succinctly interviewed by Manchester Muslim Writer's founding member, Zahid Hussain on the tactics and logistics of authorship and moreover, opening out Professor Ramadan's latest book, The Quest For Meaning', for the audience, now settled and quieted into position to hear the finer philosophical suggestion and theological understandings of the text.

It is I feel, of great credit to Mr Hussain and his eloquent line of questioning, that such thinking printed into text is kept on a platform I can reach, and I reached the place in time to catch the ride. I found myself nodding in agreement with each answer involuntarily, for I was afforded the clarity of deep thought made easy, punctuated toward the end with several questions fielded well.

And with a wink, Professor Ramadan was gone, ushered out into the night, while those left gathered to feast on the delicious food which had taken several days to prepare.

I have not yet read, The Quest for Meaning', though i now appreciate the intentions within the text. My one hope for today, as I script this entry, is that all those who bought the book, will read it and pass it onto someone else, and spread those words like a table cloth over the new year to wait for the sun, like a semi-colon; preparing the sentence for change.
Posted by garside at 01:30 No comments: